As I boarded the flight from Mumbai to Kathmandu, the only thing I had planned for Nepal was a beer.

No hostel reservation, no onward travel bookings, no research done. I was going to meet a Scot named Gordon at a little bar in the bustling traveller (or tourist, to some) district of Thamel in Kathmandu.

We had only virtually connected a few hours earlier on TrekkingPartners after posting similar open requests for Everest Base Camp treks. My post was  lame, honestly, and am probably lucky to have received a response. It likely went something like: “Everest Base Camp Trek Departing November 2-4, maybe get a guide?”

We quickly exchanged a couple emails where Gordon, who had just returned from an Annapurna Circuit trek, laid out the knowledge he had acquired: the cost for a hiring a guide, flights to Lukla, what gear we’d need, estimated dates, etc. Glad someone had their shit together.

Gordon proved to not only have his shit together but also seemed generally sane. Or, at least as much as one can tell over email. This *tends* to make a difference when you’re going to potentially spend two+ weeks with someone, every day, with no where to hide. So, my only plan for Nepal was to go have a beer with this Internet-Scot, who would be wearing a blue fleece, and see if this trek was to be.

When you travel for long enough, especially while traveling solo, you begin to develop an efficient sense for parsing travelers you can stand and those you can’t. One beer in, I knew Gordon and I would get along just fine. He had a real positive attitude and threw around a hearty laugh. A couple hours later (and perhaps a couple more beers) and we were meeting with our trekking guide, picking up our last-minute gear, and preparing for an early morning flight. Yes, the next morning. 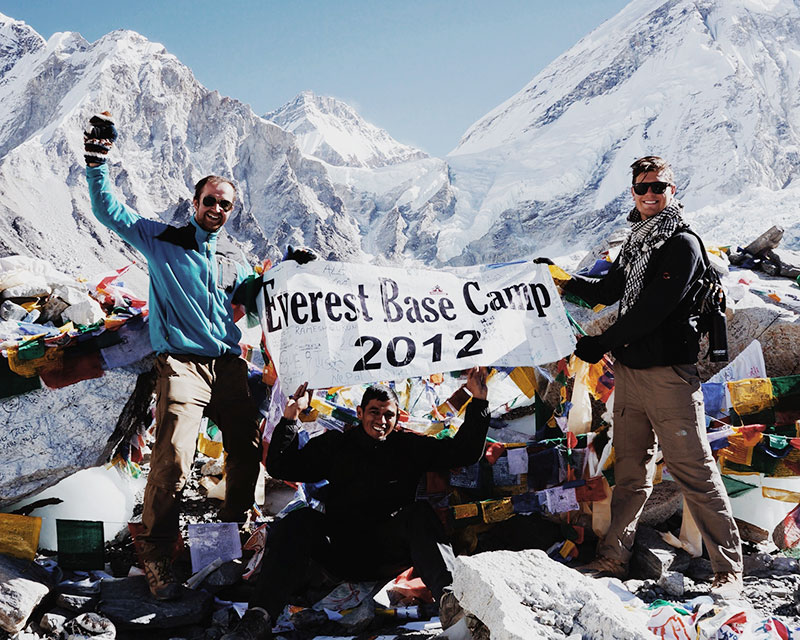 Gordon, our guide Hari, and I at Everest Base Camp

The next two weeks would be some of my most memorable from seven months of travel. Nepal is an incredible place and the trek to Everest Base Camp was challenging and extremely rewarding. The Himalayas became a deeply spiritual place for me in my travels and I often tell people if I could do a day over again it would be one from my trek. By the time we descended, I didn’t just have new experiences and achieve greater heights, but had acquired a good friend.

Four months later, in a dimly lit bar in Manhattan, I would be meeting with Gordon for another beer (though, this time, not a Gorkha). He had a new job in London and I in New York. We slipped effortlessly back to the Himalayas and we may as well been back in a Nepali teahouse drinking rakshi and playing cards around a radiating stove.

Without TrekkingPartners, I would have never met Gordon and very likely would have never ended up at Everest Base Camp. The trek can be a bit more logistically complicated and expensive than others in Nepal and having a partner enabled it to become reality. When you travel, the people you meet along the way are the only ones who can relate to that moment in time, that experience, that feeling. There is a strength in that bond that can last a lifetime.

So, get out there and FIND YOUR GORDON. You’ll never forget it.

Anthony Marnell will always be a global traveller and, until his next global adventure, works with startups in New York. He’ll be meeting up with Gordon in New York again next week and is pretty sure it’s Gordon’s turn to buy the beers…