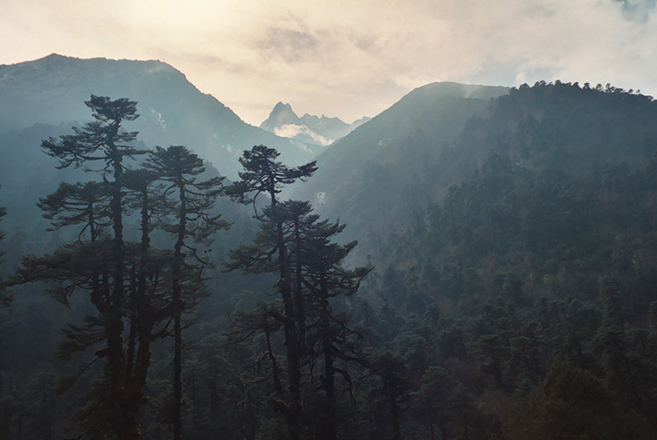 Do the North and then South trail.

I used Hard Rock. They had to do a lot of juggling to get me into Kanchenjunga during the monsoon season due to the change in airports and a variety of other itinerary problems which they handled smoothly. The airport is closed for probably another year and we used another airport, private transportation, and buses to get to and from our destination. The roads are pretty dicey and we had to hike out further than intended due to problems with the road at the end of the trip. My guide did a great job of getting me the best seat on the bus and other than being a whole day trip, it wasn’t that bad, Just don’t get hung up on how close the bus comes to other vehicles. I’d say the side view mirror was 3” from disaster much of our passing time.

You need two people other than your guide and porter to officially be able to get into the area and Hard Rock came up with a “ghost” trekker. The necessary paperwork to appear that I had a second trekker was worked out. The park personnel don’t care if you really have another trekker but they do care that you have the permits for two.

Do the North and then South trail. Preferred due to elevation gains and took me about 25 days to visit both glaciers as well as set up a series of cameras that I was using to hunt what I believe is behind the yeti myth.

My guide was Paysang who has done the trip a number of times as well as being a local, very knowledgable, and Mingma my porter who has also trekked this area for years. There English was a little sketchy, but they worked very hard at taking care of my needs, such as looking for bear dens in a rain storm.

I strongly recommend at least a guide and one porter in case there is an emergency. Paysang did it once as a solo guide and won’t do it again due to the possibility that if something goes wrong with either of you, there is no back up. A very sensible precaution.

I hiked the area during monsoon which I don’t recommend due to the difficulties of trails turning into creeks, waterfalls, bridges washed out, landslides, and lots and lots of rain and not a single tourist in the area. Even with a porter I was still carrying a 50 lb pack with all my gear. Strongly recommend really good hiking boots with very sticky soles. The steepness of the trails and any wet rock make a header off the trail a real possibility.

We camped out a fair amount as many of the trekking “hotels” were closed. These “hotels” are very rudimentary. We also lived with yak herders and bought dal bat and potatoes off the locals to keep our food stores up. I had a problem with the smoke fires, they burn yak dung, and often their rock homes were filled with smoke as they don’t have a chimney system. I didn’t have a problem with rodents but again I was very early in the season and what was really a problem were the jukkas, leeches.

On one particularly difficult day we had to hike for ten hours due to a landslide taking out the trail and finding a way to by pass the slide which had created a vertical escarpment. It was raining which brings out the leeches and we spent two hours hiking at night by headlamp with leeches covering the bushes we were wading through. I had 40 of them on my legs, even though we kept stopping to remove them, by the time we had made it to our campsite. I’m told that the leeches won’t be present later in the season, but we went through Night of the Living Jukkas, pretty bad. Oh yeah, the salt sucks. The little bags of salt I attached to my walking poles were pretty worthless. Ask Paysang, as a chemist I came up with an alternative that really works. Kills the small leeches and deters the big 3” long ones.

There are trees for mouse or bear bagging until you get to the really high elevations above 14,000-15,000 feet.

I brought my solar panel. Never used it. There are solar and electrical capabilities at some of the locations we stayed at. If you are going later in the season it will be even easier. Just take a spare set of batteries so you can charge one set while using the other.

Dal bat is your primary meal and supplements would make a change of pace for the western taste. I only brought two chocolate bars and hoarded them for the really tough days. I also recommend a couple of bottles of ketchup which makes eating two plates of rice more doable. Drink mix also makes it easier to down the 3+ liters of water you need to drink every day at elevation.

The trails when wet are dangerous. One mis step can put you over the edge. Happened to another tourist at Hard Rock last season when she was messing with her iPod and took one fatal step. The guides in the area say that it is the second hardest trekking trail in Nepal. I’ve got to agree. As a professional guide in the US I don’t think I’ve hiked on a more, “keep you focus on your feet” kind of trail.

Buy all your fleece in Kathmandu at the North Fake stores. Jackets, pants, rain suits, down vests–Stuff is incredibly cheap. There are a bunch of knock off stores right around Hard Rocks office. Critical gear like tents, walking poles, boots I brought from home. Your stove and canisters will be provided by Hard Rock. They also pack very simple food for camping, noodles and soups. If you are carrying your gear, as I did, it makes the trip a lot more demanding, so leave anything you don’t need behind.

Have a really good water purification system. I had a Miox and back up Agua Pura. Don’t take any chances on the water. The water looks clean but you will see poop everywhere, even the most isolated areas have animals that climb into the highest areas. Due to the elevation, it is really important to have a bladder system so that you can sip constantly. You can also ask the lodges to pour hot water into these bladders in the evening (think hot water bottle) which makes a sleeping bag so much warmer on those really cold nights.

Trekking poles saved my butt a number of times. You may also want a pair of tennis shoes for wading across streams. We had some bridges washed out and I had to go bare foot which worked fine, but you really want to protect your feet. Even a sprained ankle can be a big deal due to the isolation.

I had an incredible cultural experience partly because I was so early and even many of the locals hadn’t moved back to the area, so I hung out with families that are here all year. I also mentioned I was looking for a creature that may have started the yeti stories and my stealth cameras wouldn’t be recording any tourists on the trail during my September trek. Good luck on your trip.