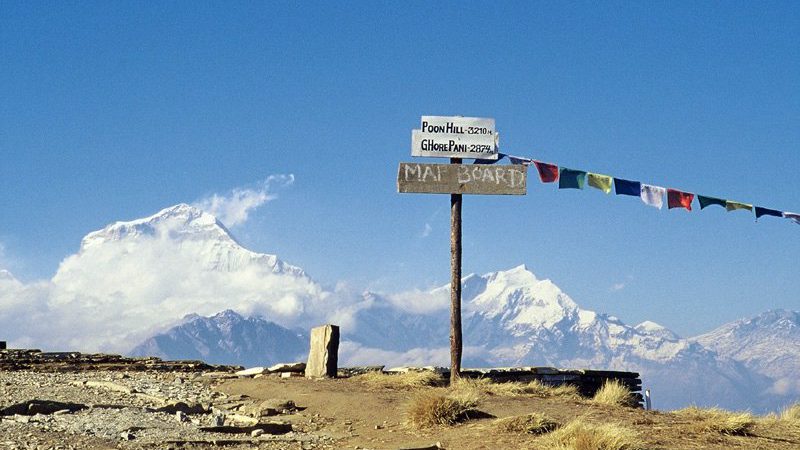 If you are on a unplanned tour make sure you travel with your friend otherwise you might get in trouble.

The trek went very well apart from the day when I got cramp in my right leg. I had never trekked to Nepal. My friend Mike, who had visited Nepal in 2010 had gone for trekking. He usually goes to Nepal for trekking. Last time out he went to Ghorepani and suggested me to go for a short trek to Ghorepani. I in my early 60’s was going for the trek to Nepal for the first time so wanted to go on fully organised trek so I asked Mike to suggest me a agency if he had any. Then he told me of Shambhala Trekking Agency, the agency which he uses when he goes for the trek to Nepal. So, I contacted them a year ahead on the contact address he provided. Finally in the December of 2011, I was ready for my first trip to Nepal and got my luggage packed.

I arrived in Nepal they were their to receive me I was driven to the hotel Tibet in Bauddha. Then, they told me that all the necessary arrangements for my trip had been made and we would be starting our trek on Tuesday 20th Dec. They introduced me with the guide his name was Padam Ghale. I was well excited. On the next day I asked them to arrange sleeping bags on hire. They arranged it for just 1 US$ per day. I was told to get ready for the early morning flight to Pokhara. So, I was totally ready at the hotel when my guide arrived at the hotel to pick me up for airport. We then had a short and scenic flight to Pokhara. In Pokhara I met with the porter of our trip his name was Akal, I am not sure about his surname, it might be Gurung. After meeting with the porter we three, me, Padam and Akal departed for a place name Kande. It was nearly an hour drive in a taxi. Then from Kande I started my first trek in Nepal. It took me nearly 3 hrs to reach Australian Camp. It was expected that we would have reached there within two hours. Then, I came to realize that I was too slow climbing uphill, my age was the main reason for it. It had nothing to do with Padam and Akal. We stayed overnight in the guest house in Australian camp. After having a fine dinner (Nepali Dal Bhat) Padam gave a short briefing about the next days trek.

Next day after breakfast we set out for the trek. Today I tried to increase my pace to reach Landruk in the mentioned time. We walked for about 3 hrs and had lunch in the place named Tolka. After taking some rest in Tolka we departed for Landruk. I was happy when I reached Landruk as I was only half an hour late than the mentioned time. Landruk was where we were supposed to stay overnight. From Landruk I could see the amazing view of Annapurna south and Hiunchuli as described by my guide. Then the next day we trekked to Ghandruk. The guide on the way showed me the rhododendron trees but there were no flowers in them. He described that the hills look colourful during the spring season. Then, I made my mind I return to this place once in my life in the spring season. The day was clear so when I reached Ghandruk I could observe the spectacular scenery of the Annapurna ranges and Machhapuchre. When I was exploring the Gurung village of Ghandruk, I got cramp on my right leg and it was so painful. Padam took me to the hotel where we were staying with the help of Akal. Padam and Akal were helpful at the moment. Padam brought the hot salt water and soaked my leg. Then gave a herbal oil massage and gave a pain healing medicine. Padam also brought a glass of milk with mixture of Yarsagumba for me. He told that it would help to heal the pain early and give strength. I had to take a whole day rest the next day. Next day too Padam and Akal were there by my side and helping me to go toilet and go out on the sun. The pain was decreasing. Padam repeated the same treatment that day. After dinner I had a sound sleep. The next day my pain were gone so I insisted to start a trek. Padam was worried about me I could see it in his face he told me that we should return back but I had made my mind to complete the trek. So, we headed towards Tadapani, we walked slowly and reached Tadapani in 6 hrs. Though my pain had gone as a precaution same treatment was repeated on the day we reached Tadapani. Though cramp spoiled my one whole day I was enjoying the trek. After a fine dinner and a hours chat with Padam around the fire, I went to bed. When I woke up I felt better. The medication, oil massage and Yarsagumba really worked. After breakfast we trekked to Ghorepani. Now, I was able to trek normally. We reached Ghorepani in 6 hrs. We stayed overnight in Ghorepani. Padam told me to sleep early so that we should get early to reach Poonhill for the sunrise view. Early in the morning we headed towards Ghorepani and reached Poonhill in 1 hrs. When we reached Poonhill (around 3190), the highest altitude of our trek we saw few other groups waiting for the sunrise. After few minutes wait slowly the sun started to rise in the horizon. The first light of the sun in the mountain was truly majestic. I enjoyed the panoramic view of the high Himalayan ranges, Annapurna, Machhapuchhre and Dhaulagiri being some of those. It was a heavenly place with mountains infront and clouds underneath. After spending few time in Poonhill we trekked back to Ghorepani. After having breakfast in Ghorepani we trekked down to Hile. It was a easy day of trek. We went downhill to reach Hile and stayed overnight there. The next day was the last day of our trek. Trek down to Nayapul was the easiest. I was enjoying the trek a lot so thinking it was the last day of trek, I was feeling unhappy deep inside my heart. I was not willing to end my trek but I had to. I had already used 1 extra day due to cramps on my leg and I was not able to afford more days in Nepal because my departure date was arriving. Since I used one extra day during the trek I had to skip the Pokhara part and had to return to Kathmandu the next day by flight. I ended my 9 days Kathmandu to Kathmandu trip and was ready for departure. On the 11th day I have had a farewell dinner with my guide and a good friend Padam and my porter Akal. It was my 12th day in Nepal and was ready to head back home. It was the beautiful and memorable trip of my life.
On the day of departure, Padam came to the airport to see me off. It was on of the hardest moment of my life to be parted with Nepal. But I was happy too because I was carrying sweet and unforgettable memories with me. Finally, returned to my home and shared my memories with Mike and enjoyed the New Year at home remembering the sweet memories I had had.

I will be trekking in Nepal and will be eager to meet my friend Padam and trek with him for one more time.

It was my first trek but the agency that I had chosen had previously informed me all the gears I require. So, I had no any problem with gears. The trip was fully prepared and everything was there when I needed during the trek.

I was fully satisfied with the trip cost. Every penny I had spent was worth it. Satisfaction level was high. I admire the services they provided me with kind and friendly behavior.