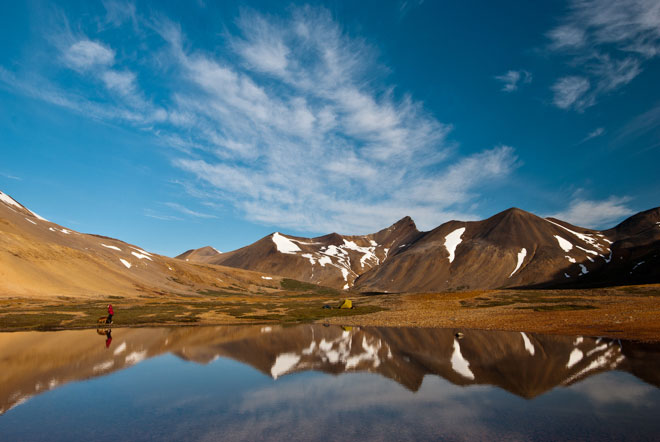 One of the most beautiful treks in BC.

This is a relatively unknown trek in British Columbia, maybe receiving around 30 visitors each season. Every day of the trek is different from the other, passing through mountain valleys of incredible orange and red mineralizations to volcanic plateaus littered with cinder cones and fine sandy pumice. Mt. Edziza and the Spectrum range are located in the Mt. Edziza Provincial Park in the Tahltan First Nation territory of northern British Columbia, 35 km. west (by air) of Highway 37 at Tatogga Lake. From the air, you can see where the lava poured across the plateau and down through the trees to the lakes and creeks below. Normally, trekkers undertake one section at a time – either a 5-day trip along the Edziza plateau or a 5-day trip through the Spectrum range. For either one of these 5-day treks, most people fly out from Mowdade lake which is roughly the dividing line between the Edziza and Spectrum regions.

Kelly, you’re in for a surprise. Edziza has to be one of the most beautiful and diverse places in BC yet even people that live in the area don’t know about it.

There are two hikes that people generally do, both lying inside the park. As Wendel mentioned, definitely read up on the BC Parks’ website. The more popular route that most people do is across the Edziza plateau, from Buckley Lake to Mowdade Lake, and takes 4-5 days. The other hike traverses the Spectrum Range from Little Ball Lake to Mowdade Lake, also 4-5 days. People sometimes combine both going from Little Ball to Buckley which takes around 8-10 days but involves carrying heavy bags at the out set.

Both routes are great hikes, and if you can combine both then all the better. If you’re trying to visualize it, the Edziza route is more volcanic with flat walking and the Spectrum route is full of colourful mineralizations and dips in and out of valleys as your cross over ridge lines. Google Earth has high-res imagery around LIttle Ball Lake in the Spectrum Range and will give you a good idea of the overall topography of the park.

An average distance of walking per day is 10 km. If you come through Smithers, you can order a map through Interior Stationary and have it waiting for you when you arrive. They don’t always have it in stock so best to order ahead of time.

This route through 270,000-hectare Mount Edziza Provincial Park, in BC’s northwest, is best done mid- to late-summer — local weather starts to get very dodgy by the end of September. Accessed via foot, hoof or, preferably, floatplane from Telegraph Creek (Highway 37), Edziza is characterized by otherworldly, volcanic terrain — lava flows, basalt plateaus, cinder fields, pumice rock and 2,787-metre Mount Edziza, a dormant volcano surrounded by barren, 1,300-year-old cinder cones. This multi-day route — the only marked trek in the park — requires total self-sufficiency; at times, even water is scarce. The pack-in-pack-out, north-to-south Buckley Lake to Mowdade Lake route will take you about seven days.

Charter flights in/out of the park
BC Parks Page for Mt. Edziza