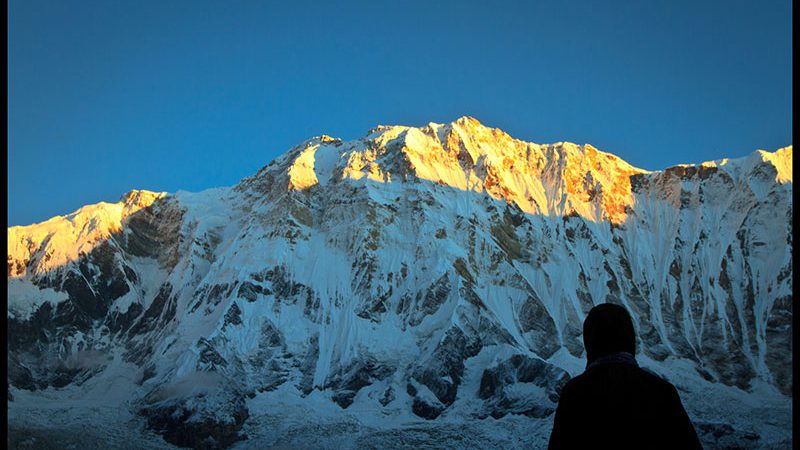 I woke up at around 7am and got ready for the bus ride to pokhara. After reaching pokhara at around 3pm, i headed straight for the ACAP office from where I took the ACAP and TIMS. These 2 are permits required for trekking in the Annapurna region. Then I started walking for pokhara lakeside and found a basic hotel to stay for the night. In the evening, I bought a map of Annapurna region and other necessary equipment’s.

I got up again at around 7am and after having breakfast, i set off. I dumped some of my stuff at the hotel and took a cab for Phedi, the starting point of the trek. It started to rain and at around 9am, I started the trek along with my brother. It rained for a while and we continued walking through the flight of stairs. We crossed a check post at Dhampus where we had to show our permits. The guys at the check post said that we were really unlucky, as Dhampus is a magnificent viewpoint on a clear day. This lowered my moral, as I was afraid that maybe I won’t be able to get any view’s throughout the whole trek because of the clouds. We went on to Pittam Deurali, where we had a tea break and I found a leech on my leg. Then, we moved on to Langdruk where we had lunch. It was around 4 pm and we still kept moving. Our plan was, since its cloudy down here, its better to keep moving forward. That way we can spend extra time at a place where the view is better. So finally, we stopped at New Bridge for night halt. The area near New Bridge is filled with leeches and they sucked quite a lot of blood.

Since the best views of mountains are at sunrise and sunset, I never missed a sunrise throughout the whole trip. Also, in the whole trip, sunrise was the only time when the sky would be completely clear. During daytime, it was pretty unpredictable. So, i woke up at 4 30am, that is 1 hour before sunrise. The sky started to clear up and enjoyed a beautiful sunrise. At around 8am, we started for todays trek. Because of yesterdays leech attack, I picked up some salt from the lodge owner and carried it all the way up and down, as salt is the only way a leech will let go of you. We marched on towards Jhinudanda, a beautiful place from where you can see Gangapurna. To make things better, there is also a hot spring very near to the lodges. We took a short break there and started off again. Our next stop: Chomrong, gave us quite a bit of trouble. It was continuous uphill, going up flights of stairs for about 3 hours. We were gaining altitude, so it was difficult to keep going up for a long period of time. Chomrong is the biggest settlement in the Annapurna region, and is a hub. So, its quite big, and it also has a helipad as well. We did not stop at Chomrong, as we had plans to stop at Sinwa for the night. Now, we had some relief, as we had to descend for a long time. We went on to upper Sinwa and were really exhausted. We met a nice couple from Seattle who were on their way down. I asked them about the view up at base camp. They said that it was clear for like 30 minutes only at sunrise (I started to get really nervous now)

This was the most tiring day of the trip. We had good views of Hiunchuli and Fishtail in the morning. Our initial plan was to go to Deurali, but we went on to MBC. We moved through dense forests and we were already tired when we reached Deurali. We had our lunch there, and started for the final trek of the day. We started slowly, as we were over 3000 meters now. Suddenly it started to rain, and field of view was narrowed down to some 100 feet or less. Nonetheless, we continued through the dense clouds. At night, the sky generally clears up, but not that day. It was extremely gloomy and i kept sulking about the idea of what if the weather remains bad at the base camp. At night, it was really cold

5 30am, still no sign of the sky clearing up. I stayed out in the cold till 7am, praying for good weather, but I was really disappointed. Today, we only had to trek for 2 hours, so we were being lazy. We met another couple who came back just from the base camp. They said that it’s all down to luck now, as they only had a window of about 5-10 minutes to see Annapurna through some clouds.

Now, I was totally broken, but somewhere deep, I still had a flickr of hope left. We trekked through the glacier area, which offers the best views of the trek, through thick clouds and was unable to see anything. The whole day was very cloudy, and not for a second, I could see anything. I went to bed only thinking about the next morning, and for the first time in days; i had some headaches, mainly because we ascended about 1500 meters in one day, which is not advisable. In fact, I myself won’t be doing it again, as this can trigger Altitude sickness.

THIS WAS THE DAY WHEN ONE OF MY DREAMS CAME TRUE. I woke up at 5am, and what magnificent timing it was! . Clouds were just clearing up, and there lay the giant ice and rock structure. ANNAPURNA 1, one of the mightiest mountains of the world. The view was so great, that I will definitely remember it for the rest of my life. We enjoyed the view for 1 hour and right before we left, I looked back to see clouds were coming up once again and soon the whole mountain would be covered up again. Today we planned to go to Chomrong and this would be the longest trek of the whole trip. When we had to go up all the way again near Chomrong, I literally started to counting steps in my head, like- ‘1 less step to go’. We were dead tired, and we enjoyed free hot shower!

Last day of the trek. We went back to pokhara today and thats all about it. It was a memorable trip. I think this will be the best trip of my life for a year, as I plan to go to the everest region next year (EBC) !

More photos from this trip.