May 25, 2015: With monsoon season coming, there are hundreds and thousands of people without permanent shelter, so finding shelter solutions over the next two months will be extremely important, especially in rural areas," warned Mark Smith, senior director of emergency affairs at World Vision. Clean water – especially in light of the upcoming monsoon season – is of major concern in Nepal.

Water is already fairly scarce within the Kathmandu valley even at the best of times.

Moreover, with Nepalis resorting to camping outdoors, the lack of proper hygiene facilities and broken sewage systems heighten the risk of diarrheal disease epidemics. The World Health Organization (WHO) estimates that only 27 percent of the population has access to adequate sanitation, adding that diarrheal diseases, dysentery, cholera and typhoid are the primary causes of death in the country

PLOS Medicine, a peer-reviewed weekly medical journal covering the full spectrum of medical sciences, just published its latest evaluation of Nepal after the recent earthquakes and the vaccine-preventable diseases looming on Nepal’s horizon. PLOS’s dispatch was written by Lorenz von Seidlein and posted on May 21, 2015:

May 12, 2015: Another earthquake, 7.3 magnitude, struck Nepal yesterday, its epicenter near Namche Bazaar in the Everest Region. Luckily the impact was less severe than the first, but still at least 32 people dead and over 1,000 injured. This only adds to the desperate need for shelter and food before the monsoon season comes in June.

April 25, 2015: a 7.8 magnitude earthquake struck in the center of Nepal. Its epicentre was 75 km. northwest of Kathmandu (35 km. east of Lamjung), causing severe damage and triggering avalanches in the surrounding regions. Langtang, Kathmandu Valley, and the Everest Region suffered the most damage, with the village of Langtang being completely wiped out by a landslide.

It's been a hard time for everyone, with the loss of family members, homes, entire savings, and historical landmarks. On the other hand, it's brought the people of Nepal together in the face of adversity and strengthened bonds with those from outside Nepal who offered aid.

With the death toll estimated at 7500, along with 10,000 injured and 1.4 million in need of food assistance, there is still a need for assistance. We've compiled a list of reliable, effective groups working hard to bring support to the people of Nepal. If you're able to, please consider donating time, money, or volunteering via the links below.

If you are in a position to donate, below is a list of local, grassroot initiatives working hard to provide relief. By donating to these groups, your money will go directly to the people that need it most via local channels mobilized by local experts:

Rebuild Langtang Campaign
Langtang village, in particular, will need rebuilding support after the first weeks have passed. After first medical care has been delivered it will take large efforts to re-establish community life back in the valley.
Lokesh Todi's Relief Fund
Support and sustain the work of local NGOs and first responders on the ground.
Mountain People's Initiative
Provide assistance to those in need around Kathmandu. They've set up a temporary relief centre in Thamel functioning as shelter/store/aid post for local Galdunga people.
Tsum Nubri Relief & Recovery Program
Recovery effort in Tsum by the local citizens of Kathmandu.
Sherpa Gear's CrowdRise Campaign .
100% of your donation will go for immediate relief on the ground through our Paldorje Education Fund network, already set up to benefit the children of Sherpa families in remote villages.
Tsum Valley Fund by Dhawa Tashi
Help rebuild Tsum Valley, Nepal after the Earthquake. Dhawa is from the Tsum Valley.
Nurse. Teach. Reach Relief Fund
NTR is supporting those most affected by the disaster through a coordinated response with Local Health Authorities. NTR is helping to provide for the immediate needs of affected populations.
PHASE Nepal: Support for Remote Communities
The remote villages where we work are among the worst affected; many people have lost everything. PHASE is already on the ground in these remote areas, helping to provide support and rebuild lives. For more information, visit their website. 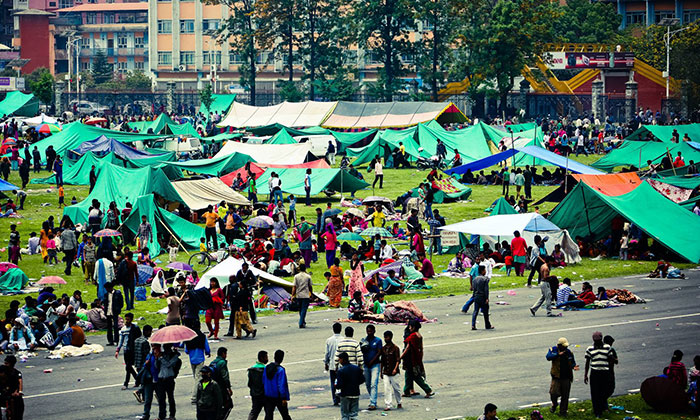 We're in the process of collecting a list of organizations and groups that travellers can volunteer with if they plan to come to Nepal in the near future.

Nepal Earthquake Response
Our team of experienced disaster relief professionals has been coordinating groups of 20 – 50 volunteers (already on the ground) a day. We have supported Catholic Relief Services and Unicef in distributing thousands of emergency supplies (shelter and sanitation kits, food, water) and creating child friendly spaces in Kathmandu. Our response strategy is to continue to support local and international organizations by mobilizing local volunteers in distribution, rubble removal and deconstruction. We anticipate opening the project to volunteers once infrastructure is in place and projects identified — within a few weeks.

Google Person Finder
List someone you're looking for or provide information on missing persons. Google has launched a People Finder tool to help victims touch base with friends and loved ones. It allows users to look for victims or post information about people, and it also works by text messaging.
ICRC - Register a Missing Person
Register a missing person or list yourself as 'safe'. Individuals can access these lists directly on the webpage to look for the names of their family members or register themselves as safe or in danger.
TAAN (Nepal) Missing Trekker Form
TAAN is trying to track the whereabouts of missing trekkers. Kindly help us by providing information about your missing trekkers and support staff by filling up this form ASAP. It will help us to coordinate with government agencies for rescue works.

Langtang Missing/Found Person Database
A list of people missing in Langtang that anyone can post updates to.
Langtang Missing/Found Person Facebook Group
Public FB group for people with loved ones missing/found/stranded in the Langtang region
Facebook Safety Check
Quickly find and connect with friends in the area. Mark them safe if you know they're OK.

Nepal Earthquake 2015 Facebook Community
A volunteer page run by Nepalis based abroad to share information.
Kathmandu Living Labs
Has been crowdsourcing technologies and social platforms to map the relief effort and access to local villages.
TrekkingPartners' Facebook Page
Updates on the current rescue efforts and situation in Nepal.
Reddit Nepal Earthquake Page
A comprehensive lists of links and resources relating to the earthquake in Nepal.
World Food Programme Earthquake Report
A general situation report by the World Food Programme released May 4, 2015. (PDF)

Photographer Thomas Kelly
Actively documenting the aftermath of massive Earthquake that rattled Nepal on 25th of April, 2015.
Photos by Lokesh Todi
Lokesh has been documenting the aftermath of the Nepal earthquake on the ground.
Code for Nepal
Map of reported deaths, injuries, and houses damaged.
Langtang Reference Map
Shows the villages of the Langtang Region along with on-the-ground status udpates.

Earthquake relief operations in districts outside the Kathmandu Valley will be headed by the following secretaries of the government of Nepal. The officials will be coordinating with local bodies, political parties, private sector and civil society in their respective areas.