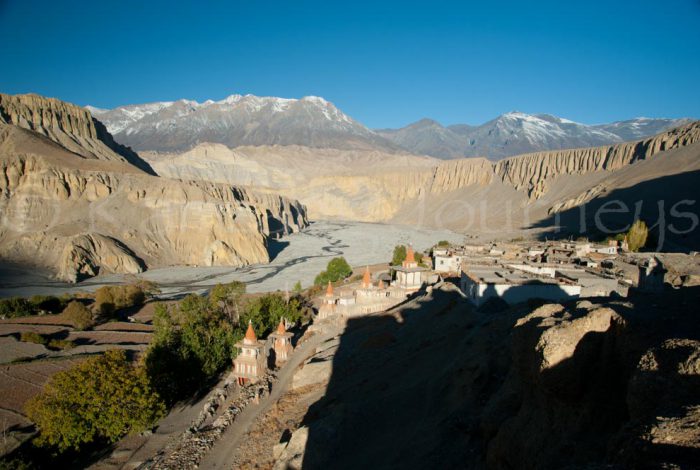 Kim is the founder of Kamzang Journeys and leads almost all of the Featured Treks as well as a few Himalayan bike rides. She is also a partner in Project Himalaya Treks. She has been based in Kathmandu for the past 12 years and takes care of everything from creating & upkeeping the website, writing & researching the trek itineraries, taking the photos, answering emails and doing the accounting to creating the Kamzang dining tent decor and even shopping & packing for the treks. She also manages the Kamzang Fund.

Kim has been looking for a spot to build the perfect bamboo hut since graduating from Colagate University in 1988. Her search has taken her on many years of travels throughout Asia, Africa, Australia & NZ, the South Pacific and cross-country in the States, but although she now has a basement (her parents') full of ‘curios’ to fill several houses, that idyllic dwelling still eludes her and her semi-nomadic lifestyle continues. She now spends most of her time in the Himalayas, often in her 'Kamzang Style' tent (gur) ...

Kim grew up in the East Coast of the US, but lived afterwards in Hawaii, California and Colorado, where she spent most of her time outdoors biking, hiking, windsurfing, surfing, skiing and, of course, collecting funds for further travels. After trying out the corporate world of marketing for Geographic Expeditions in San Francisco and briefly volunteer teaching in the Everest region of Nepal, she met the Project Himalaya team, Jamie & Joel, and has been creating and leading treks in Nepal, India, Tibet and Bhutan ever since.

Our Kamzang Journeys trek into remote Upper Mustang is one of this breathtakingly beautiful region’s most interesting and far-flung treks, following old salt-trade caravan trails into Mustang’s most remote regions. No other company camps with the nomads, and we’ve even thrown in a few exploratory days …
— 17-DAY UPPER MUSTANG PERMIT —

Situated in the rain shadow of the Dhaulagiri range, the Buddhist kingdom of Mustang is one of Nepal’s most diverse and spectacularly beautiful regions. Sculpted canyons and fantastic rock formations, traditional, white-washed Tibetan-style villages, crumbling fortresses, royal palaces, unexplored cave complexes, Tibetan Buddhist monasteries and Himalayan snow-peaks characterize this spectacular region, a thumb sticking up into the Tibetan plateau.

Trekking Mustang’s most remote routes, we venture deep into the realm of the last nomads of Mustang (and perhaps Nepal), still living their traditional migratory lifestyle on the high plateaus bordering Tibet. We’ll trek along the eastern, winter route from the mythical walled city of Lo Manthang and explore the forgotten ‘sky-caves’ (some we’re some of the only Westerners to visit) as well as the renown Luri Gompa and Tashi Kabum, filled with some of the most exquisite murals of the Tibetan Buddhist world and dating back to ancient times.

We camp at some of Mustang’s most far-flung villages such as Dhe, Ghara, Yara and Tangge, enjoying a distinctive cup of salt-butter tea and bartering for locally-woven textiles with the villagers.

Upper Mustang and its walled capital, Lo Manthang, is a remote and starkly beautiful region, home to Tibetan Buddhism as well as the remnants of the more mystical Bon religion which pre-dates Buddhism. Mustang was first explored by a handful of intrepid Himalayan travelers and pilgrims in in the 50s and 60s, and we continue in their spirit of exploration. We journey along some of the least known routes to the more isolated villages in this sun-drenched region, often following the rocky Kali Gandaki river-bed, other times trekking on spectacular trails high above it, and descending through marvelously sculpted and multi-hued gorges.