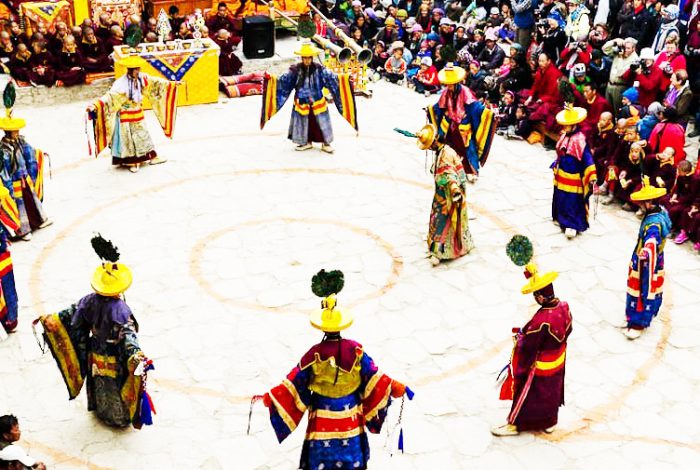 This Tiji Festival trek, which offers a spectacular trekking into the remote Trans-Himalayan mountain region with the Tibetan influence culture.

Namaste & Warm Greetings from Land of Himalaya to all the Adventure Travelers!

I started my career as a kitchen boy back in the year 1980’s and since 1990's I have become a Trekking guide. I was very much attached to this profession that I loved being Trekking Guide. I have guided almost all the areas of Nepal, including all the popular regions like Everest, Annapurna, Langtang, Dolpa, Tibet etc. I have guided the trip with mostly American, Australian, British, Canadian, Danish, French, Japanese, Indian, and Swiss clients.

The Mustang is a distinctly separated region of Nepal, where influences divide unequally into three. Firstly, it is a land standing alone and bravely independently, secondly, it draws almost all other historic, cultural and religious traditions of Tibet, and, thirdly (lastly really) it is a somewhat inappropriate part of Nepal (which continues to recognize its autonomy and its king and its status as a kingdom.

In March 1992, the ‘forbidden’ kingdom of Mustang was opened to the outside world. Now, for the first time in recent history, foreign travelers are able to visit Lo Manthang, the seat of an ancient kingdom dating back to the 15th century. The people of Upper Mustang are called Bhotias and those from Lo are called Lobas. They speak various dialects of Tibetan.

Tiji is a celebration and reaffirmation of this myth. Throughout the festival the events & story of the myth are re-enacted. The festival timed to coincide with the end of the dry season and ushers in the wetter monsoon season.

The Tiji festival is a three-day ritual known as “The chasing of the Demons” and it is the center of the Tiji myth. Tiji tells the story of a deity named Dorje Jono who must battle against his demon father to save the Kingdom of Mustang from destruction. The demon father wreaks havoc on Mustang by creating a water shortage which, in this extremely arid land, is the most precious life-sustaining resource. Dorje Jono eventually defeats the demon and banishes him from the land.

Note: Mustang is Restricted areas which have been opened for Group Trekking only and a trekking permit will not be issued to individual trekkers so we need at least two people to operate this trekking.