We had a awesome 12 day trekking adventure in the Himalayas made even more wonderful by the brilliant guide that is Bharat KC!

On Saturday 12th October 2013 we took a 5-6 hour jeep ride to the Langtang region which borders Tibet. We were lucky that we got the jeep and not the bus because the roads were terrible! Dirt roads with sheer drops, and no railings but it was an experience! Bharat was really informative and was able to provide us with lots of interesting facts about the area and the different cultures during the journey. We stopped off a few times and Bharat introduced us to Nepalese Chai which was great.

We stayed the first night in a guesthouse in Syabrubesi at 1470m. The next morning we walked about 5 hours over bridges and through forests to Renche 2400m. The teahouses we stayed the night in all along the trek were very cosy and run by sherpa families. Bharat always made sure we had a great place to stay at the end of our day and was really good at organising and planning our days. Our standard meals rotated between Dhal Bhat (lentils, veg & rice), momos (dumplings) and Sherpa Stew (thick veg soup with rice dough noodles).

Unfortunately we were unlucky with the weather from this point, there was a cyclone in India which affected us a little. Trekking from Renche we made it to ‘Summit Lodge’ which was a village just before Langtang (approx. 3100m), we had to cross some swollen rivers which was scary. We had to rest here because we were soaked through from the rain. We played alot of card games with Bharat and it was a really social atmosphere.

The next day we trekked through the pretty village of Langtang and went straight through to Kyanjin Gompa (3860m). Luck was on our side, because the following morning it was completely clear!

Wed 16th we awoke at 5am to climb Kyanjin Ri (peak 4600m) and watch a panoramic view of the sunrise. It took your breath away, and I don’t think the photos do it justice! At this sort of altitude, it’s difficult to catch your breath, and for the climb up we were having to stop more frequently. We both had slight headaches, but they didn’t develop thankfully. We were drinking about 4 litres of water a day to prevent any sickness, Bharat was really good at making sure you were drinking enough water and kept a record of how your feeling to make sure you were safe. In the evening, Bharat organised for one of the sherpa’s to bake a birthday cake as it was Jen’s birthday which was a nice surprise!

Friday we joined the Gosainkund trek, and walked to Thulo Syabru (2230m). This little stopover was a luxury, as we stayed in a proper guesthouse with an attached bathroom – and a proper toilet! No more searching for the squat loo with a torch! The town was really pretty and well catered for tourists – we had a coffee and a packet of digestives for lunch! From this point onwards we had perfect weather and no more rain!

From Thulo Syabru we trekked through foggy forests to Sing Gompa (3330m). And from there, we trekked to Gosainkund Lakes. By this point we had sampled every type of tea on offer. Masala, ginger, lemon, mint, black……

Gosainkund Lakes (4380m) are sacred lakes for Hindus, in July/August 100,000 people trek up there for an icy dip, which is crazy! In the morning we discovered it had snowed, but was perfectly clear (lucky again!) on the downside it was a tasty -11 degrees. So that morning we climbed up to 5000m, our highest point, so from here we could see a spectrum of different mountain ranges – including Annapurna (200km away), Manasalu and Langtang. It was a brutal climb but well worth it for the view! After this we spent the next two days walking all the way back down and caught a jeep back to Kathmandu.

Overall we loved our guide who was a fantastic source of information, we’ve learnt so much and he was so much more upbeat and social that the other guides we met! He even provided us with stats on the trip which can be found below: 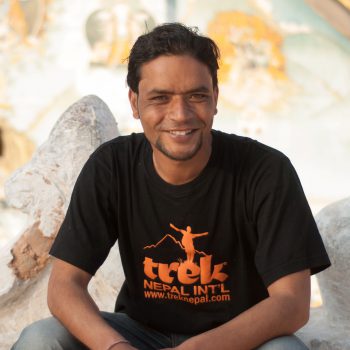