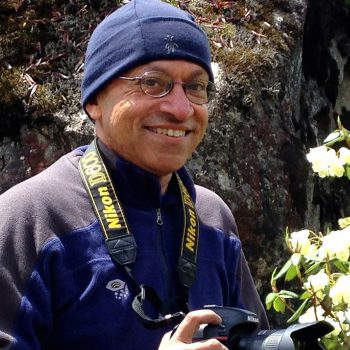 Sujoy Das has been trekking and photographing in the Himalayas for more than thirty years. His photographs and essays have been featured in leading magazines worldwide like The Washington Post, Lonely Planet, The Outdoor Journal, Lifeforce Magazine, APA Guides, Outlook Traveller, India Today Travel Plus, Frontline, The Telegraph, Times of India Crest, India Magazine, Frontline, Mint Lounge, Hindu Business Line etc. He is the joint author of Sikkim- A Travellers Guide and Lonely Planet – Nepal for the Indian Traveller

He leads treks and photo workshops under the banner of South Col Expeditions www.southcol.com and every single trek has been led by him personally Some of the areas where South Col runs treks are Everest, Annapurna, Langtang, Mustang and Manaslu in Nepal. In India, Ladakh and Sikkim are favoured destinations.

He has a deep interest in the history of Everest and the Sherpa community and has been asked to speak at Kolkata and Delhi by The Himalayan Club on this subject.

He is currently working on a book of photographs on the Nepal Himalaya and organizing treks and photo workshops as a part of South Col Expeditions.

An out of the world experience to the Annapurna’s

HI! Recently went for a trek to Annapurna Base Camp ( ABC) , Nepal with Sujoy Das who runs South Col Expeditions. Every aspect of the trek, stay , food, safety was personally looked into by Sujoy. He is also extremely knowledgeable on the Himalaya’s and a top rated photographer. He has authored the lonely planet guide on Nepal ( Indian Edition). He shares his knowledge freely on any aspect of travel or photography. I would very highly recommend South Col for any of their future treks and hopefully would be trekking again with him soon.

I went trekking with a group put together by Sujoy Das, who runs South Col Expeditions. Sujoy was our trek leader, organizing all details of our trek. He works very closely with a Nepalese guide who he uses for all treks throughout Nepal. I can’t speak highly enough about Sujoy and our trip. He attends to every detail, listens closely to the needs of his clients, and is an all around joy to trek with. He is also a professional photographer, and sometimes runs treks more focused on photography. His website is www.southcol.com