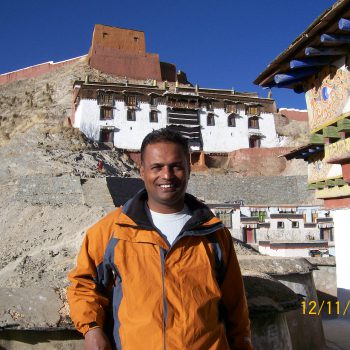 Saroj Neupane  was born in a remote village of Dhading District, and he graduated in Business Management from Tribhuvan University. From the beginning of his entry in mountain tourism, he showed his talent as an adventurer.

In 1993 He started to work as a trekking supporter
In 1994 He started assistant guide same year he became guide.
In 1996 he leaded a successful climb to Island peak, Labuche Peak & Mera Peak.
In 1997 he conquered Island Peak & Pokhalde with An English Team
In 1998 He played a role of successful guide by leading trek to Rolwaling cross tashi lapcha and climbed Island peak same year climbed tent peak, Singuchuli,
In 2000 A.D. He climbed Chulu Peak with ” Lancashire Mountaineering Club” from Uk