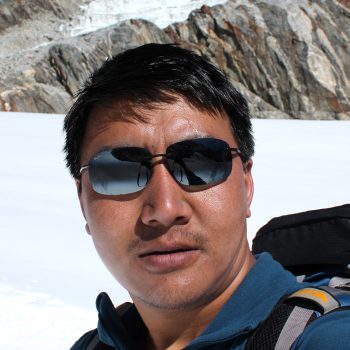 Pem Dorjee Sherpa was born in 1982 in a small, remote village Called Chyangba, Solukhumbu. He has been trekking and climbing in the Himalayas for more than 15 years. He has climbed Mt. Everest twice the second time with his girlfriend Moni Mulepati. On the summit, they followed through on a plan they had kept secret from their parents and became the first couple to be married on top of Mt. Everest.
They also hoisted the flag of Rotary International a club that he has involved in honor of its centennial year.

Aside from his mountaineering achievements, Pem has demonstrated an admirable commitment to improving the quality of life in his home village of Chayangba.
He has organized many service projects to Provide medical care for the villagers and to build a library and School, Smokeless Stoves and drinking water system in Himalayan Villages.

Pem is certified as a Trekking and Mountaineering Guide by the Nepal government. He is also an active member of the American Mountain Guides Association (AMGA), American Alpine Club, Nepal Mountaineering Association and Everest Summiteers Association. He also hiked Continental Divide National Scenic Trail
3,100 miles between Mexico and Canada.

He now lives with his wife Moni & Daughters Pelzom & Mezel in Ann Arbor, An owner of a Local fair-trade store The Himalayan Bazaar and Of Global interest Adventure Travel on 218 S. Main St. Ann Arbor, Michigan 48104.

Not just a guide, but a friend.

Dhurba was recommended to me as a guide for the Nar Phoo Valley trek by a friend I met at a monastery.
Dhurba turned out to be real down to Earth, and cool. He made a great trekking partner.
And of course, he was also very knowledgeable about the route, which came in handy a few times where the main path
had been washed away in landslides.
I had used a different guide previously for Poon Hill, and in comparison, Dhurba had better English, was more talkative
and fun, more knowledgeable about the locals. Better in every way.

I have trekked with Milan both as an individual and as part of different groups to Everest, Manaslu circuit, Annapurna and Phokare. He is a wonderful, intuitive guide who takes great care and inspires confidence in all his clients. He is knowledgeable, friendly, fit, and good fun. He paces his treks well according to one’s needs and the challenges desired. He organized everything seamlessly from the hotel in Kathmandu, airport pick up and drop off to all the logistics en route.
He is very reassuring to clients (not only his own!) concerned about Acute Mountain Sickness and has shared his experience other guides who were less able in this respect. He is always welcome along the way always engaging with the locals who he seems to know well.
I felt very safe with him knowing that everything including the unforeseen is fully taken care of.
I have been impressed by his unfailing courtesy and diplomacy within the groups which makes trekking with him a pleasure for everybody. He is popular with his helpers, making sure that all is well for them. His English is pretty good too.
On the way back from Manaslu I changed my route plans: he was extremely accommodating and made it happen as I wanted without a problem.
He organized other activities for us including rafting all at a great price! There dosent seem much that he cannot do which has to be down to his experience.
It is hard to recommend him highly enough. He certainly has a special place in the heart of all those that trek with him.

Most Experienced and amazing trekking guide

When my friend referred me of him I thought the person with such a huge experience and such a huge personality would trek with his clients. But was amazed it was really him. He though has great achievements and is one of the greatest personality did not behave so. He was simple as he looked. He was friendly and funny most of the times. He respected his profession and did not hesitate to go on a trekking with his clients though he was a owner himself and was also the reputed personality in the field of trekking and mountaineering.
He made our tour memorable. He was explaining each and every details about the place. He could also speak Gurung language with the locals and others. I will be visiting Shambhala Trekking Agency all the time I do trekking in Nepal and will be using him as our guide if he is available at that time.

This was our second trek with High Camp Trekking and Norsang Lama. Our first was to Langtang in the fall of 2013.

Both trips were incredible! We are 2 retired professionals in reasonable good shape, ages 59 and 60, but we are no superstar trekkers.

Norsang was great from the start. He responded quickly to all emails with detailed packing lists and trip info. Once there he matches his pace to yours. He knows all the trails intimately. He gave us as much info as wanted regarding the cultures, religions and scenery. He just takes very good care of his clients.

Arjun helped me to realize my dream.

Without my tour guide Arjun, I would not be able to have gone up to Kala Patthar and seen Mt. Everest from up close. And I would not be able to finish the trek in 9 days, one day ahead of my tight schedule without his support. There isn’t enough space here for me to detail my experience and my gratitude. I would highly recommend him to my close friends.

Highlight of my trip to Nepal!

Ujjwal is very passionate about is job and clearly love what he’s doing. His english is very good and he as a lot of conversation, making it always fun and enjoyable! He is really funny as well.

He took amazing pictures of our trek and was happy to share it with me. Doing the trip with him, I felt I had a chance to see the real Nepal and talk to the local people. Even after the trek, bakc in Kathmandu, he was waiting for me at the bus stop to show me the way back to my hotel, which was very kind if him!

Great guide. English is excellent allowing discussion of all sorts of things. Good sense of humour. Always keen to help.

This was ujjwals first time doing manaslu so his knowledge of this particular area is improving quickly. He would very quickly find out any info we needed to know.

Massive thanks to Dmitry!!! I had such as great time trekking up to Annapurna Base Camp and Poon Hill Trek !
I had a great experience doing it too. We saw Buddhist monastery with many monks in flowing maroon robes and viewed many Buddhist religious items including prayer wheels and a courtyard where we watched many Buddhist monks debating with younger monks. It was amazing!
The trip was properly organized and we haven’t had any problems.
Really great service too: Jeep from airport, private bus to and from Pokhara, best loodges on the way and Dmitry was such a good guide, he taught me a few Nepalese words along the way.
This has been an amazing trekking that I will never forget.
I highly recommend this Guide for any trips in Nepal.

Truth be told, we didn’t hire Arjun. We made friends with a guy who had Arjun as his guide.

We decided to hike together for 2 days, and Arjun was not only completely fine with letting us tag along with his client, but also fully embraced our company, was very friendly with us, talked to us about local life, and helped us negotiate some rooms.

He has no seeming collaboration to bring business to any guesthouses, and did not demand any money of us since we tagged along with his client.

My friend was so touched by his company, and his story about improving his trekking experience by doing other treks, that she wants to buy him a tent as a gift, to enable him to explore other treks.