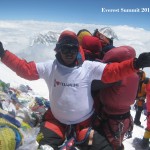 Born at the altitude of 4200m, Mingma Gyalje Sherpa started his career of mountaineering since 2006 with his first climbing directly starting from 8000m peak.
Mingma was born on 4th April, 1986 in Rolwaling, a remote area in the Northern East of Nepal on the borderland of Tibet. He was groomed in the valley for 11 years and then sent to boarding school in Kathmandu, the capital city of Nepal. He completed Graduation in Business studies in 2011. At present he has been leading so many climbing team on different mountains. He is experienced leader and he did globally accepted Mountain Guide course from NNMGA affiliated to IFMGA/UIAGM.

He is young, energetic and well experienced climber, successfully climbed Mt. Everest 4times and other 8000m peaks like Mt. Kanchhenjunga (8586m), Mt. Lhotse (8516m), Mt. Cho-Oyu(8201m), Manaslu (8163m), Mt. Ama Dablam(6812m). Beside this, Mingma is the the first summitter on Mt. Cheki-Go (6257m) and other several 6000m peaks like Thorong Peak, Paldor Peak, Mt. Larkya North peak………He also reached the altitude of 8300m on Lhotse via South Face, which he regards the most difficult and interesting climbing. He hopes to climb it again in future too.