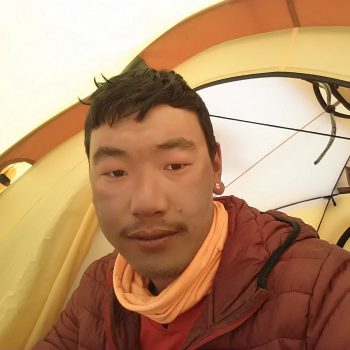 It has been 5 years that he became a fully certified climbing guide and has participated in several Everest climbing expeditions and finally sumitted on 2016. In the short span of only 5 years, he has guided hundreds of clients to several 6000m -7000m peaks leading them to the summit successfully. Anybody who comes in contact with this young and energetic lad never forgets him because of his friendly and jolly nature. He, though young is very professional personal. Understands your climbing/mountaineering capability and guides you to the snowy peaks accordingly. With good hold in English, Nepali, Sherpa and Korean language he will be great leader guide and the partner while climbing the peaks. He is one to have escaped the avalanche in Everest base camp triggered by earthquke on April 25, 2015 while some of his peers were unlucky. While enjoying his company on your trekking and mountaineering trip in the Himalaya, you will remain shocked on his story of the Everest avalanche, a very near escape jaws of death.