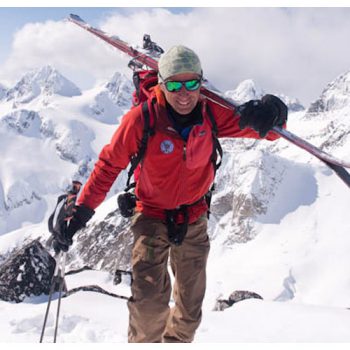 Northwestern British Columbia has no big names, but some very big mountains. No fancy resort towns, but a living aboriginal culture. More bears live here than people: come and tilt the balance of the wild.

Like you, I love skiing, climbing and being in the mountains. This has been my passion since I was 15, and my excitement is as keen as it always was, only now with 35 years of experience to share.

Since 1981, when I graduated as a mountain guide from Munich Technical University, I have made my living accompanying other mountain lovers, young and old, weak and strong, novice or expert, in a wonderful and ever-changing environment. Climbing rock faces and frozen waterfalls; enjoying mountain meadows; leading day trips and three-week expeditions; holding basic rock and avalanche courses, as well as, instructing mountain guides and avalanche professionals. My life in the mountains continues to be varied, exciting and satisfying.

This has been a passion of mine since I was 15, and my excitement is as keen as it always was.

I grew up in Munich and started climbing in the Wetterstein mountains of Bavaria and Tirol. Faced with the necessity of making a living and having no stomach for an academic life-style, I turned to the old and honourable profession of mountain guiding (also eventually finishing a Master’s degree in the Liberal Arts, but that’s another story).

In the 1980s, I was lucky enough to climb and guide many of the great rock and ice routes of the Alps: the north face of Lalidererspitze and the southwest face of Marmolata, the Brenva Spur on Montblanc and the northeast face of Piz Roseg.

Lured to northern Canada by the promise of wilderness and ever-new vistas, I guided Denali (Mt McKinley) three times in the 1990s and spent much time in remote places like the Stikine Icecap and the Saint Elias Mountains.

In the northwest region of Canada where I live, I expanded into fields where there was little local expertise available.

I developed and ran avalanche safety programs for mines and roads (yes, that’s where you hang out of a helicopter and drop large bags of explosives with a burning fuse in them). On the other side of that field, I am now a Qualified Avalanche Planner consulting with industry on their avalanche safety plans.

Canada’s North is where I belong, and where I would like to bring you.

In 2001, we built the spectacular Burnie Glacier Chalet in the Howson Range with wood from our forests and the help of many dedicated and skillful friends. Plus, there are many more ranges in the north, with even bigger mountains, all waiting to be explored.

I have trekked with Milan both as an individual and as part of different groups to Everest, Manaslu circuit, Annapurna and Phokare. He is a wonderful, intuitive guide who takes great care and inspires confidence in all his clients. He is knowledgeable, friendly, fit, and good fun. He paces his treks well according to one’s needs and the challenges desired. He organized everything seamlessly from the hotel in Kathmandu, airport pick up and drop off to all the logistics en route.
He is very reassuring to clients (not only his own!) concerned about Acute Mountain Sickness and has shared his experience other guides who were less able in this respect. He is always welcome along the way always engaging with the locals who he seems to know well.
I felt very safe with him knowing that everything including the unforeseen is fully taken care of.
I have been impressed by his unfailing courtesy and diplomacy within the groups which makes trekking with him a pleasure for everybody. He is popular with his helpers, making sure that all is well for them. His English is pretty good too.
On the way back from Manaslu I changed my route plans: he was extremely accommodating and made it happen as I wanted without a problem.
He organized other activities for us including rafting all at a great price! There dosent seem much that he cannot do which has to be down to his experience.
It is hard to recommend him highly enough. He certainly has a special place in the heart of all those that trek with him.

Most Experienced and amazing trekking guide

When my friend referred me of him I thought the person with such a huge experience and such a huge personality would trek with his clients. But was amazed it was really him. He though has great achievements and is one of the greatest personality did not behave so. He was simple as he looked. He was friendly and funny most of the times. He respected his profession and did not hesitate to go on a trekking with his clients though he was a owner himself and was also the reputed personality in the field of trekking and mountaineering.
He made our tour memorable. He was explaining each and every details about the place. He could also speak Gurung language with the locals and others. I will be visiting Shambhala Trekking Agency all the time I do trekking in Nepal and will be using him as our guide if he is available at that time.

This was our second trek with High Camp Trekking and Norsang Lama. Our first was to Langtang in the fall of 2013.

Both trips were incredible! We are 2 retired professionals in reasonable good shape, ages 59 and 60, but we are no superstar trekkers.

Norsang was great from the start. He responded quickly to all emails with detailed packing lists and trip info. Once there he matches his pace to yours. He knows all the trails intimately. He gave us as much info as wanted regarding the cultures, religions and scenery. He just takes very good care of his clients.

Arjun helped me to realize my dream.

Without my tour guide Arjun, I would not be able to have gone up to Kala Patthar and seen Mt. Everest from up close. And I would not be able to finish the trek in 9 days, one day ahead of my tight schedule without his support. There isn’t enough space here for me to detail my experience and my gratitude. I would highly recommend him to my close friends.

Highlight of my trip to Nepal!

Ujjwal is very passionate about is job and clearly love what he’s doing. His english is very good and he as a lot of conversation, making it always fun and enjoyable! He is really funny as well.

He took amazing pictures of our trek and was happy to share it with me. Doing the trip with him, I felt I had a chance to see the real Nepal and talk to the local people. Even after the trek, bakc in Kathmandu, he was waiting for me at the bus stop to show me the way back to my hotel, which was very kind if him!

Great guide. English is excellent allowing discussion of all sorts of things. Good sense of humour. Always keen to help.

This was ujjwals first time doing manaslu so his knowledge of this particular area is improving quickly. He would very quickly find out any info we needed to know.

Massive thanks to Dmitry!!! I had such as great time trekking up to Annapurna Base Camp and Poon Hill Trek !
I had a great experience doing it too. We saw Buddhist monastery with many monks in flowing maroon robes and viewed many Buddhist religious items including prayer wheels and a courtyard where we watched many Buddhist monks debating with younger monks. It was amazing!
The trip was properly organized and we haven’t had any problems.
Really great service too: Jeep from airport, private bus to and from Pokhara, best loodges on the way and Dmitry was such a good guide, he taught me a few Nepalese words along the way.
This has been an amazing trekking that I will never forget.
I highly recommend this Guide for any trips in Nepal.

Truth be told, we didn’t hire Arjun. We made friends with a guy who had Arjun as his guide.

We decided to hike together for 2 days, and Arjun was not only completely fine with letting us tag along with his client, but also fully embraced our company, was very friendly with us, talked to us about local life, and helped us negotiate some rooms.

He has no seeming collaboration to bring business to any guesthouses, and did not demand any money of us since we tagged along with his client.

My friend was so touched by his company, and his story about improving his trekking experience by doing other treks, that she wants to buy him a tent as a gift, to enable him to explore other treks.

We made a 7 days trekk around the Langtang Valley. It was an amazing experience. The landscape was really beautifull, full of trees and we even could see some monkeys.

The trekk was a success thanks to Hari. I think he was the best guide we could have, an amazing guy. Nowadays, we hope to get back to Nepal one day and do another trekk with Hari.