Home Blog Asia A Guide to Paragliding in Pokhara

Finished trekking and looking for something to do in Pokhara?

Pokhara is one of the top 5 commercial tandem paragliding locations in the world, with all the right ingredients: stable thermals, convenient take-off and landing zones, the safety of a large lake and incredible mountain views. 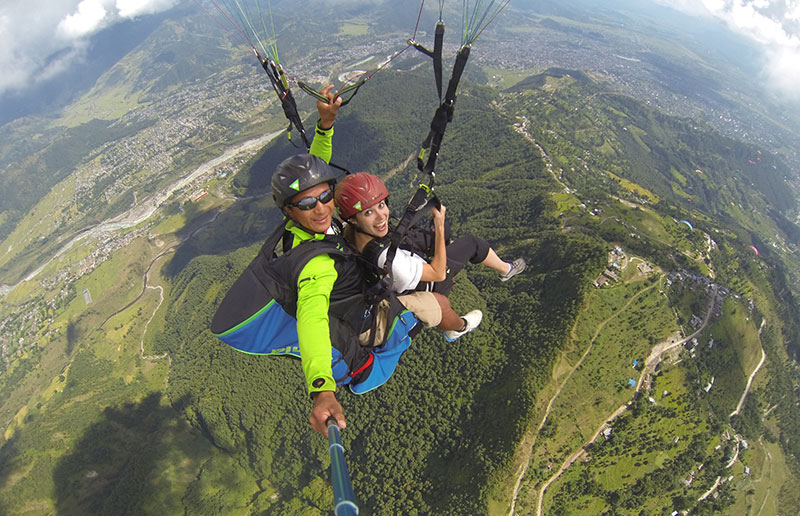 Paragliding might not be in everyone’s budget. That being said, if it’s something you want to try at some point in your life, Pokhara is the perfect place to do it. Looking back, most likely you won’t regret it.

There are 19 paragliding companies operating commercial tandem flights in Pokhara, and there seems to be a fixed price (which includes transport and insurance) no matter which one you choose.

Tandem paragliding means you are seated in a separate harness in front of the pilot where you can sit care-free and enjoy your surroundings, take pictures and talk with your pilot during the flight. It is quite comfortable apart from a large void beneath your feet.

Flying On Your Own

If you are an experienced paraglider and want to fly on your own, you can get a flying permit from the civil aviation office in Pokhara. The permit costs Rs. 4520 ($45) for 15 days which you can renew upon expiration. It takes about 1 hour to get permit and you need to provide them with a passport photocopy, visa photocopy, photo of yourself, proof of insurance and your paragliding license.

Generally, it’s safer to go paragliding in Pokhara than it is to cross a busy intersection in Lakeside. There are more than 250 flights a day during peak-season. You have a reserve chute and a large lake for safety. However, it is an extreme adventure sport and risks are involved. The biggest risk is during take-off and landing if there is a sudden change in wind.

Make sure the company you choose has insurance coverage; some might say they have it even if they don’t. Best is to go with a reputable company. The government of Nepal has no system in place for regulating paragliding. Out of the 100 Nepali paragliding pilots in Nepal, not a single one holds a Nepalese paragliding license because there isn’t one.

Pilots are, however, internationally certified, which means international paragliding schools, like FAI, APPI and BHPA, have come to Pokhara to run 15-day pilot training programs . Upon completion, pilots are certified to fly anywhere in the world on their own. It then takes around 2 years of experience before they become a commercial tandem pilot. They have to prove themselves by paragliding in different locations, in different weather conditions, with different instructors and by performing different exercises such as practising using their reserve chute. After that, they have to pass a tandem exam with an APPI instructor.

The standard paragliding flight takes off from Sarangkot (30 min. by jeep from Pokhara), floats above Sarangkot for a while, then heads over Pokhara before performing spiralling acrobatics (optional) on descent to Phewa Tal next to Lakeside.

For best conditions, the suns needs to have been out long enough to heat the earth and create the thermals necessary for lift. The early morning flights tends to be a bit less than 30 minutes as the thermals haven’t developed yet. If you’re looking for a clam, less turbulent flight, this is the best time.

By 11:30 AM, the thermals have become active and the best conditions for paragliding are in place. If you want to get your money’s worth, this is the best time to fly.

You can go paragliding in Pokhara year-round as long as it’s not raining and the thermals are active.

The peak season for bookings matches the normal tourist season in Nepal – September/October/November and February/March. The fall months are the clearest where thermals develop quickly with easy, high flying of up to 3000 m.

The best time for flying, however, might be if you catch a lucky window of clear skies during the monsoon season of July and August when the vegetation is lush and the rivers are thundering.

You should book a flight at least 1 day in advance so companies can plan ahead. To confirm your booking, you will be required to make a deposit of Rs. 1000-2000. You can book by phone, email or in person a day before your flight.

Only two companies (Sunrise and Blue Sky) offer an introduction course to paragliding. It costs 120 euros/day, which includes equipment. The course lasts 15 days and by the end you’ll have your paragliding license which allows you to paraglide anywhere in the world on your own.

Below is a list of established companies which are headquartered in Pokhara. I didn’t have time to visit all of them so by no means does this suggest you shouldn’t book with a different company. The company websites below are meant to give you a good idea of what’s offered.